For a month now, you have been voting for your favorite episode of Cosmic Quest in honor of the upcoming 100th episode. I’ve received votes through both comments and private messages, and the results are in. Nominations for the best episode of Cosmic Quest included, in no particular order, Attack of the Clones, For the Love of Joy, World-Wide Wobbuffet, Diving into It, Pikachu, Where are You?, Ashes to Ashes, Family Food Feud, Pretense is the Best Offense, Digging your own Cave/Keeping Your Friends Close/And Your Enemies Closer, and Let Dra-gones be Dra-gones.

This was a wide variety of responses, and there was no clear winner, so let’s say that these were all some of the best episodes in Cosmic Quest!

Now, what about me? What is my favorite episode of Cosmic Quest? The answer is too complex for me to just give one episode and be done. Instead, let’s analyze all of my favorites, many of which appeared in the above list. To do this, I will be separating episodes into categories, and then deciding what my favorite from each category is.

END_OF_DOCUMENT_TOKEN_TO_BE_REPLACED 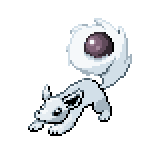 The Bright Pokémon
Type: Light
Description: The Pokémon Yang-Xing and Yin-Xing are always born as twins. Yang-Xing is said to embody all that is light in the world.
Evolves into Yin-Yang-Xing by leveling up with a Yin-Xing on the team

Trivia: Yang-Xing is incomplete. It must complete itself by merging with its dark counterpart, Yin-Xing. Preferably its twin. In its incomplete form, Yang-Xing must expel all darkness from itself. It does so by condensing it into the gem stone in its tail.

Well, here we are. Super Smash Bros Ultimate has arrived at long last. I truly cannot wait until I can get my hands on the game. The newest entry in one of my favorite video game franchises next to Pokémon has gotten me thinking, if Luna, Terra, and Sol were real Pokémon games, then how would they be represented in Smash Bros? If you’ve wondered the same, then wonder no more. The answer is here.

Terratlas would serve as slow heavy-weight character. It would be as tall as Ridley in Smash Bros, but also bulkier, due to it’s body shape, making it the most massive character in Smash Bros. This would, in turn, make it one of the slowest characters, but its power would more than make up for that low speed. Here’s a basic summary of its moves:

B: Brine: Terratlas attacks with a pulse of water from its body. As Terratlas takes damage, this move increases in power, size, and range.

Down-B:  Earthquake: Terratlas stomps the ground, creating an earthquake in the vicinity directly around it. This will stun and cause damage to any opponent in close proximity. In addition, this will cause a minor amount of damage to opponents standing on the same floor as Terratlas. The damage at a distance caused by this attack decrease each time it is used.

Side-B: Earth Power: Terratlas causes the ground in a line of sight of it to erupt. The attack is slow moving, but has very strong launching power if contact is made.

Up-B: Seismic Toss: Terratlas leaps straight up in to the air. As it travels upwards, if it contacts any opponent, Terratlas will grab them. Once at the peak of the jump, Terratlas will hurl the captured opponent straight down. If used over a ledge, the opponent can recover, but only if they act fast.

A Attacks: Various basic attacks that aren’t worth detailing.

Side-Smash: Blizzard: Terratlas summons a short ranged blizzard. At full charge, it might freeze the target.

Down-Smash: Seismic Manipulation: Attacks the ground beneath it powerfully.

Final Smash: Firma Force Of Nature: All it once, a rain, hail, and sandstorm begins. Terratlas leaps in to the air and absorbs nature’s energy all around it, then slams downwards in a semi-controllable trajectory that results in a shock wave. Afterwards, the weather created lingers for a period of time, during which Terratlas’ B attacks are powered up. 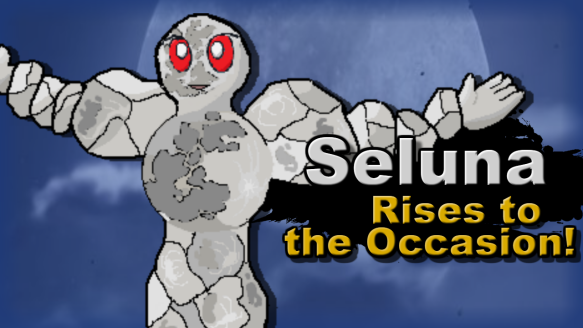 Seluna, while being quite tall, would be much more agile than most of the larger characters. It’s moves  may be weaker than Terratlas’ because of this, but Seluna can still pack a punch.

B: Lunar Beam: Seluna attacks with a beam of shadowy energy. The attack can be charged, and the longer it’s charged for, the thicker the beam, longer, and more powerful the beam will be.

Down-B: Moonlight: As long as the button is held, Seluna will slowly heal over time.

Side-B: Moonblast: A phantasmal moon appears above Seluna, and aims an attack at the closest opponent. The attack has little to no knock back, and doesn’t o the most damage, but will almost always hit.

Up-B: Stone Edge: Seluna causes rocky spikes to jet out from beneath. These spikes will cause damage and knock back to anyone they hit as the emerge, and fling Seluna up into the air. If used on the ground, these spikes will linger for a short period. or until the move is used again. Anyone besides Seluna that touches these spikes will take minor damage.

A Attacks: Various basic attacks not worth detailing.

Side-Smash: Nightstorm: Seluna attacks with a snap of dark energy right in front of it.

Final Smash: Apogee Tidal Power: A massive full Moon appears in the sky and Seluna calls upon its energy in order to attack with a massive beam of silvery lunar energy. The full Moon lingers for a short period afterwards, powering up all of Seluna’s B moves.

Now, you’re probably wondering, what about Heliosol? Well, we also need a new stage, don’t we? Let’s solve both those problems.

Solar Peak: This stage is set in Luna, Terra, and Sol’s Solar Peak Ruins, where Heliosol is found in Luna and Terra. The main floor of the stage is a raised altar above the rest of the ruins (the alter where you would encounter Heliosol). There are also two floating platforms, one over the drop-off on either side of the stage. Periodically, Heliosol will appear in the stage. It will randomly appear in its normal form or its Ascended Form. When in its standard form, it will stand in the background and randomly launch fiery attacks at the battlefield. But when it appears in its Ascended Form, it will join the battle as a boss. When it’s defeated, it will release a burst of fire and light that will cause damage to all fighters except the one who beat it. When Heliosol isn’t around, Sun-themed Pokémon such as Solrock, Solem, Volcarona, Heliolisk, Turcell, and Gigastar will appear at random in the background. They don’t do anything but stand around.

Now, there’s one more way that Pokémon is represented in Smash Bros. Pokéball Pokémon. So, of course, there’s got to be some Tenno ones.

Buffern: Buffern will follow the fighter who summoned it around the battle field, and use its ferns to shield them from certain attacks. Buffern will disappear either after a short time, or taking enough damage.

Solurtle: Solurtle will use Rapid Spin and Heat Wave, attack around the field at random.

Kappaqua: Kappaqua will stand in one place and hurl Aqua Bombs at anyone who gets near it.

Calumba: The Pokémon will fly around the field, using Aroma Therapy to heal the fighters, giving a preference to the one who called it out.

Noxic: Noxic will float around the field. Anyone who touches it will take damage over time for a short amount of time due to poisoning.

Boodini: The magician Pokémon will disappear and reappear at random. Whenever it appears, it will attack.

Gravisaac: While Gravisaac is on the field, gravity will randomly change between being more and less intense.

Myoken: Myoken will guide the fighters to treasure, such as CDs or Trophies.

And that’s it. Now enjoy all your smashing!