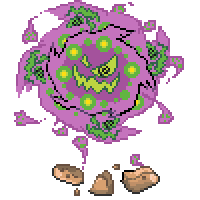 Description: The power of Mega Evolution allows for Spiritomb to break free from its Odd Keystone prison. The 108 evil spirits that form Spiritomb can now be seen orbiting it. Without the Keystone containing it, it gains great power, in the form of increased Special Attack and Speed. Its Mega Ability, Sinister Shadows, protects it from damage by Light and Fairy-Type moves, its only weaknesses.  When it returns to its original form after battle, the mystic properties of the Odd Keystone cause it to repair itself, sealing Spiritomb once more, until the next time it Mega Evolves.
Mega Stone: Spiritombite
Type: Ghost/Dark
Mega Ability: Sinister Shadows (New Ability, See Abilitydex)

Trivia: In case you couldn’t tell already, I love the more gimmicky Mega Evolutions. Instead of the Pokémon just growing bigger and stronger, I like it to have a story. Mega Spiritomb was the result of its story of breaking out of the Odd Keystone, and its ability. One of the things that bugged me when Fairy-Types first came out was that both Sableye and Spiritomb now had a weakness. Pre-Kalos, both Pokémon were the only ones to not have a single weakness, and in all honesty, it was about the only thing the two had going for them. Fairies ruined that. Of course I went and made things worse by adding the Light-Type, which gave both of them something they were x4 weak to. By granting Mega Spiritomb the Sinister Shadows ability, I have fixed this problem for Spiritomb, allowing it to regain its former glory. While designing Mega Spiritomb, I was going for the more grotesque Lovecraftian design. The multiple faces as well as the spirits entering and emerging from the body represent the fact that Spiritomb is an amalgamation of 108 spirits.